Outcomes of the Australian-led landmark clinical trial, ENZAMET, are expected to influence clinical practice around the world for men with advanced metastatic prostate cancer.

The trial, published in the New England Journal of Medicine and presented as a plenary at 2019 American Society of Clinical Oncology meeting, has shown that hormone therapy drug Enzalutamide can improve the survival of 33% of men with advanced, hormone‐sensitive prostate cancer.  It also reported a 60% improvement in the time it took to detect renewed tumour growth.

“On current trends, around 3,500 Australian men will die from prostate cancer this year.  That’s why it is urgent that we research new treatments and ways of using established treatments better,” said Professor Davis.

Monash Health was a major Australian contributor, recruiting over 40 patients. “In fact this was the largest recruitment by any individual site in the world”, said Dr David Pook, Genito-urinary Medical Oncologist and Chief Investigator for Monash Health.

“We have such a large volume of patients interested in taking part in trials, that it was fantastic to be able to offer them this opportunity”, said Karen Gillet, Manager of the Clinical Trials Facility at Monash Health Translation Precinct.

Patients involved in ENZAMET had advanced, metastatic prostate cancer, which is the second-leading cause of cancer death in Australian men after lung cancer.

The ENZAMET trial was also unique in that about 45% of men on the trial also received Docetaxel, a chemotherapy drug also known to improve survival in this setting.

Prostate cancer is complex and so are the benefits, side effects and risks of multiple treatments. Clinical trials are often the most effective way of determining which treatments – alone or in combination – will provide the greatest survival benefit to patients, with minimal side-effects.

“This is one of the most significant findings yet in clinical trials for men with metastatic hormone‐sensitive prostate cancer,” said Professor Davis. 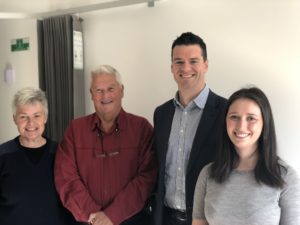